Shipping Containers Are Not Just For “Tiny-House Living”

Shipping container houses are all the rage, but there are lots of other creative uses for containers as well. From Japan to Canada, commercial shipping container construction is starting to shine. Schools and large multi-tenant commercial properties have been popping up using shipping containers giving off a modern, industrial feel. Keep reading to learn about some of these projects to get an idea of what’s happening now and what’s coming soon. 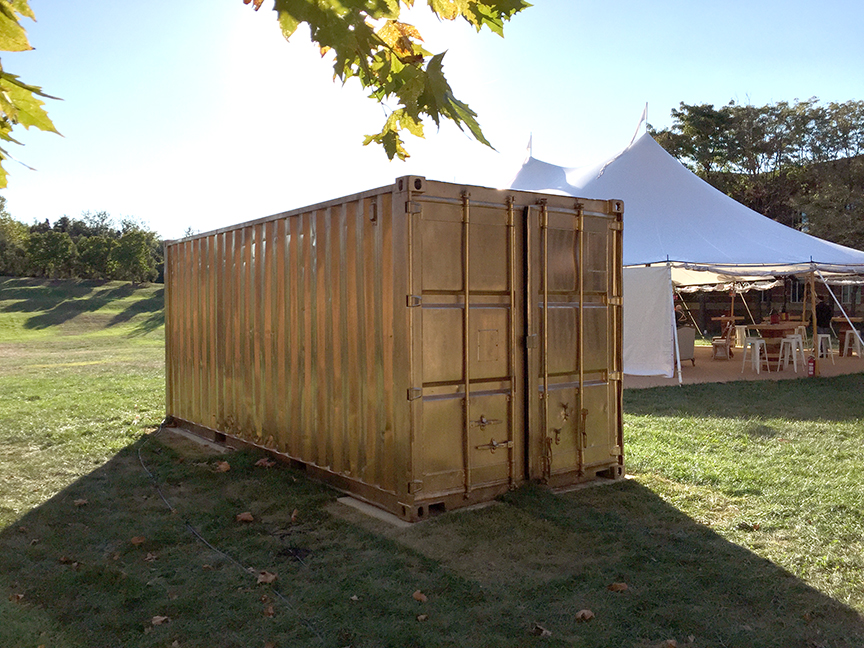 We’ve written about Portals (pictured above) before, but it’s such a cool project we’d like to praise it a bit more. Portals is a concept started by 2 journalists Michelle Moghtader and Amar Bakshi, an alumni of Yale Law school. They took modern communication technology and integrated it into mobile shipping containers. Creating these unique Portals did not come without setbacks. While coming up with the concept in his parents’ backyard Amar actually had law enforcement called in due to his neighbors suspecting the prototype as the work of a terrorist organization! Amar explained how he wanted to connect people all over the world using containers and the FBI went back to busting real criminals. As a result, these Portals have gained a lot of international attention as unique ways to link those affected in war-torn areas with the outside world. In a short period of time the units that the UN is using have had over 20,000 calls made from them. Some of these stories are making their way out to the mainstream and putting a face to the countless refugees in these war torn areas. 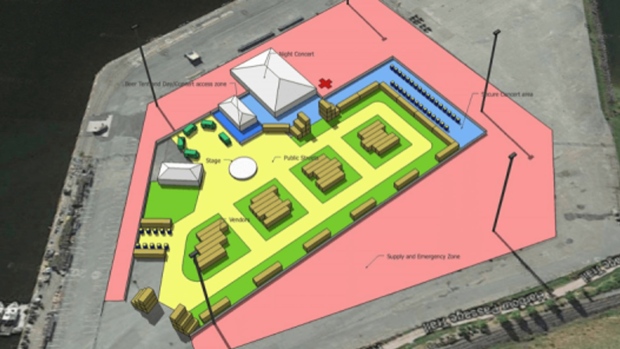 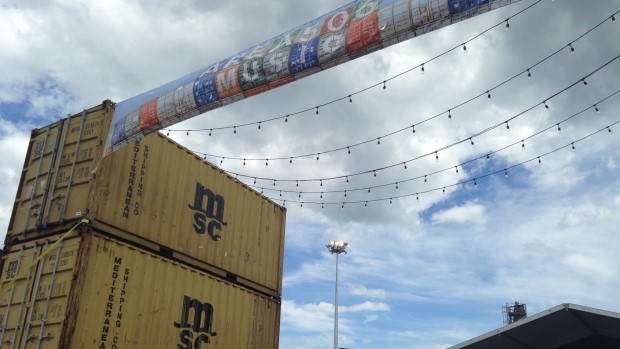 New Brunswick, Canada has a new festival called, The Area 506 which is being held on the Long Wharf of Port Saint John. In order to develop a site that can host 40+ exhibitors, bands and thousands of people in a short period of time they decided to use shipping containers. It really was an obvious choice since Saint John is a shipping port and the containers are perfect at aesthetically tying the village to its host city. Over the span of a weekend they were able to have 70 containers delivered in the layout pictured above! 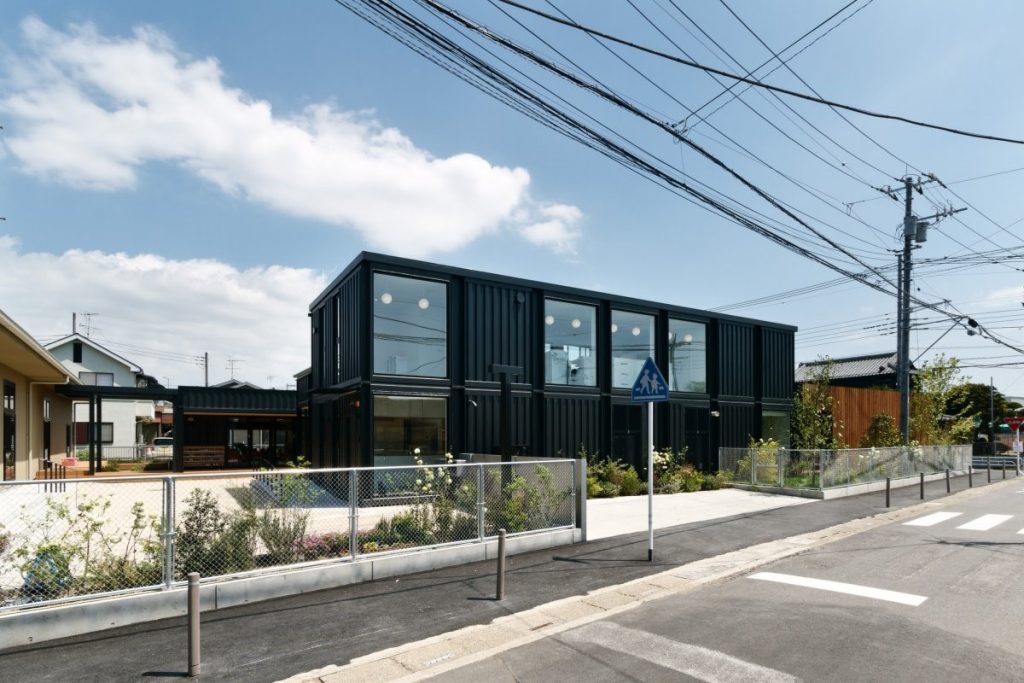 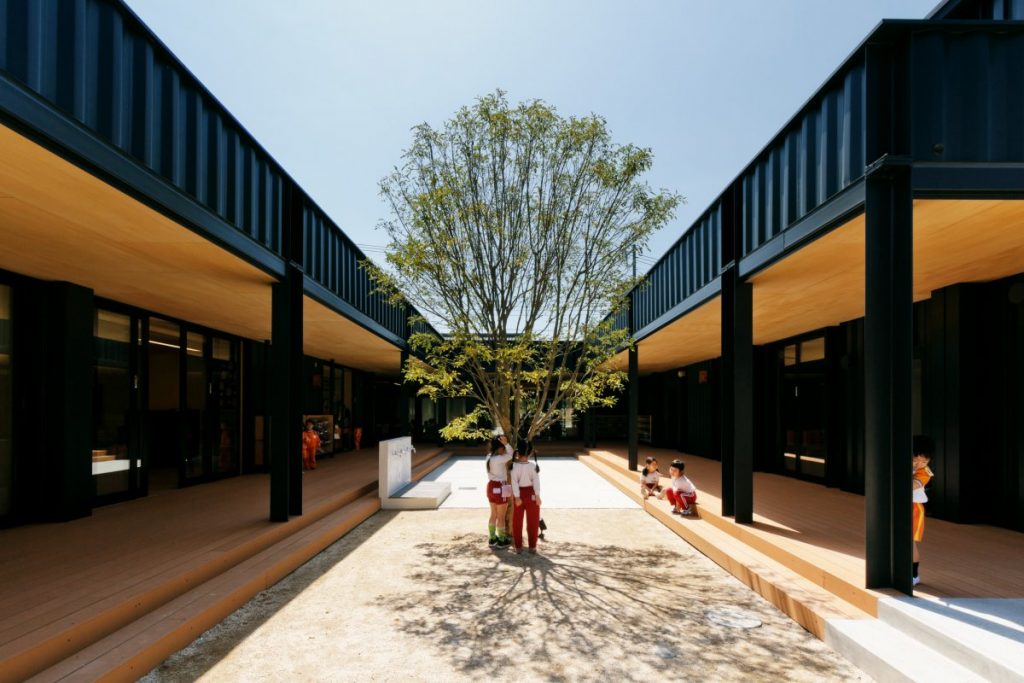 When you hear about a school using shipping containers most people think of small scale modular classrooms or community educational centers. But in Japan they’re building an entire kindergarten school out them. As the former building aged the school district’s administration looked for an alternative building material that was versatile and strong. In the end they decided to utilize used shipping containers and a bit of the old school building to complete the new facility. Since 2006 Japan has experienced 20 earthquakes of magnitude 7.0 or greater. With so many earthquakes as a real concern, the CORTEN steel in shipping containers was selected for their structural rigidity. 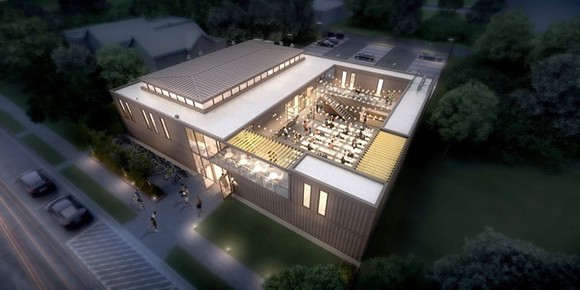 Another cool project, the Detroit Shipping Company is building a 12,000 square foot, 2 level facility to host 5 small restaurants, 2 bars, a pop up gallery and a communal dining area. This project is set to break ground towards the end of this month, August 2016. Located in Detroit, the location is close to Little Caesars Arena, home of the Detroit Red Wings and Pistons. This should bring a large amount of patrons at least 82 nights a year.  This project, like many others involving shipping containers have had their detractors. However, through persistence and planning this investment group looks to open up just in time for the winter sports season.

Shipping container construction is not limited to “tiny house living”. Many businesses and government agencies have seen a wide variety of applications coming to market that exhibit the versatility of shipping containers in the modern world. Of course there are those that oppose this alternative form of construction. However, overtime through the success of the risk takers mentioned above there is hope to win a lot of them over.